Home › Blog › All The Ways You Attract Wasps To Your Omaha, NE Property

All The Ways You Attract Wasps To Your Omaha, NE Property

While wasps are an important part of ecosystems all across the globe, you don’t want them all over your property. They build ugly nests, they’re aggressive, and worst of all, they sting. What’s really terrible is you could be doing a ton of things to attract wasps that you don’t even realize you’re doing. If you don’t understand what attracts wasps – what they eat, where they like to build their nests, etc. – you won’t know how to keep them away. Below, we’ll talk about common wasp attractants, how to reduce them around your home, and what to do if you get an infestation. 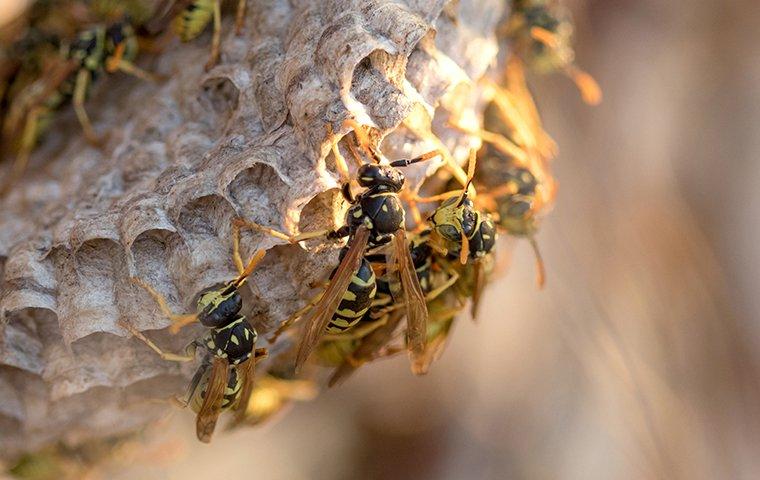 With our humid and comparatively warm climate, we’ve got no shortage of wasps here in Omaha, everything from social ground-nesting wasps to solitary and social aerial-nesting varieties. Let’s talk about a few notables:

Why Wasps Are Attracted To Your Omaha Property

Wasps are attracted to a few things but the main ones are food and places to nest. As far as food goes, most wasps are interested in sugars and/or proteins, so everything from the meat in your garbage to the sugar in your sweet tea will make them come running. Wasps also eat nectar from many different flower species, making them important pollinators. In fact, some wasps are vital for the survival of the plants they use. For instance, without the fig wasp, the fig tree would go extinct.

Wasps also need places to nest. Wasps that build hanging nests will often go for roof overhangs, the undersides of decks, awnings, and anywhere else that they can attach their nests. Ground-nesting wasps prefer to find existing holes (such as those dug by rodents). So if you have a yard full of old gopher holes, it might attract ground-nesting wasps:

Keeping Wasps Off Of Your Omaha Property

There are lots of things you can do to prevent wasps:

Unfortunately, wasps are so prolific in the warm months that it’s hard to prevent them from coming onto your property. If you do wind up with an infestation, avoid trying to deal with it yourself. That could get you stung, so it’s best to leave it to the professionals.

Here at Beeline Pest Control, we have the tools and experience necessary to deal with all manner of pests endemic to the state of Nebraska. We can safely treat any problem wasps can throw at us, so you don’t have to get stung! Reach out to us today to learn more about our one-time or recurring pest control options!