Don't Let The Hornets In Omaha Ruin Your Summer

Summer is a great time to walk the Bob Kerrey Bridge as it winds its way across the Missouri River. There is one thing that can disrupt an enjoyable evening outdoors, though: hornets. Although you may encounter a hornet on your walk on the bridge, you are most likely to encounter hornets at your home. You do not want to find yourself retreating in fear from these flying, aggressive insects.

Before you experience a painful sting, engage the services of Beeline Pest Control, which provides the best pest control in Omaha. Our professionals will evaluate your situation and solve your hornet infestation problem. 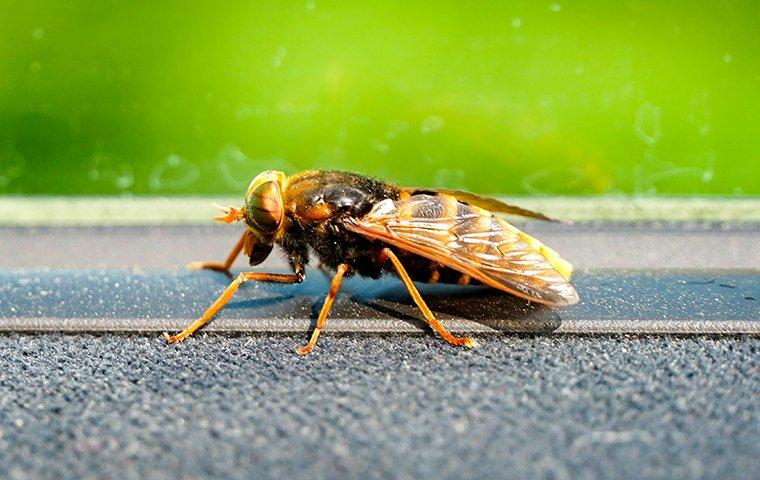 Hornets Vs. Wasps: The Key Differences

Hornets are a subset of wasps. There are various types of hornets, such as the European hornet and the infamous "murder hornet." But the most common type of hornet in the Nebraska area is the bald-faced hornet. Although commonly classified as a hornet, this insect is technically a wasp due to its relation to yellow jacket wasps.

Since hornets and wasps are closely related, it can sometimes be difficult to distinguish between the two types of stinging insects. However, there are a few differences between them. Compared to wasps, hornets have the following distinctive characteristics:

Hornets and wasps both build nests. Some wasps, like the yellow jacket, build nests below ground. Hornets always build their bulbous nests above ground in a protected location like lower tree branches, shrubs, or under the eaves of a building. Hornet nests are large, grey, paper-like structures with an opening at the bottom. Each nest contains 100 to 700 hornets.

If the nest is disturbed or the hornets feel threatened, they will become aggressive. Since hornets like to build their nests in low-hanging branches or shrubs, you can accidentally disturb a nest while working in and around trees and bushes. Like other stinging insects, their stingers have venom. Unlike some stinging insects, however, hornets can sting multiple times, resulting in high levels of venom injected into your bloodstream.

As we are at the midpoint of the summer season, the population of hornets is reaching a climax. As the number of hornets increases, they will become more aggressive. Hornets are most likely to attack this time of the year and into the early fall.

What are the best ways to get rid of hornets in Omaha? Here are six steps for hornet prevention:

Although you may take these steps, you may still find yourself having an encounter with a hornet. If approached by a hornet, remain calm; swatting or swinging at a hornet may result in being attacked. Move away from the area as quickly as possible. Do not intentionally disturb a hornet's nest. Furthermore, it is best to avoid wearing sweet-smelling perfumes and open-toed shoes when lounging around outdoors.

Each year, nearly half a million people go to the emergency room due to stinging insects like hornets. To ensure your safety and your family, invest in hornet prevention around your home.

The best way to get rid of hornets in Omaha is with the help of the talented team at Beeline Pest Control. Let our team of highly trained professionals remove the hornet nests in your yard and treat your home to deter hornets. Contact us today to learn more about our stinging insect control options.