When the weather starts to warm up, there’s one pest that starts flying around properties that nobody wants to deal with. Stinging insects in Omaha, Nebraska can be very terrifying to encounter because of their ability to leave you with painful, and sometimes dangerous, stings. However, many property owners have questions about the different species and how to deal with them. 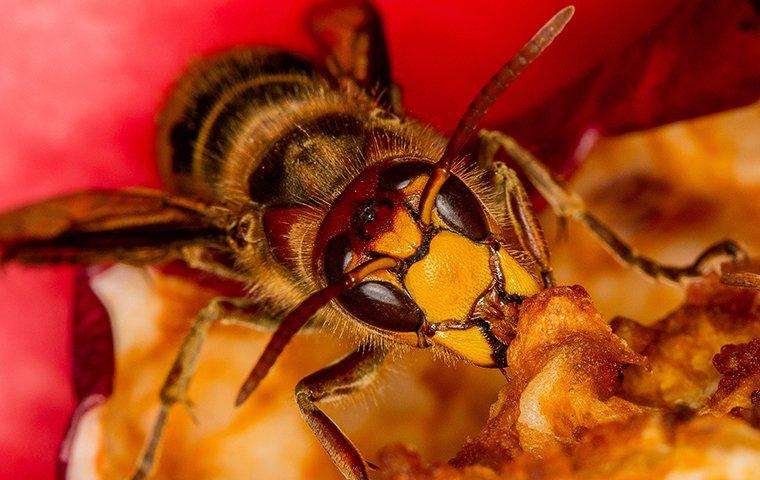 The first thing to be aware of is that hornets are technically just a subset of wasps. So, while all hornets are wasps, not all wasps are hornets. Hornets are the biggest of these eusocial wasp species, and they are also generally the most dangerous and the most aggressive making them especially difficult to deal with.

There are many species of hornets found throughout the world, but there are some characteristics that most species in the United States share. You can identify hornets by the fact that they are usually brownish in color with yellow-orange stripes or black with white stripes. They are about an inch long and only build aerial nests. They can also be told apart from other wasp species because hornets have thicker waists while wasps have much thinner, string-like ones.

One of the most prevalent species in Omaha is the baldfaced hornet which is known for having white markings on its face.

What Do You Need To Know About Hornet’s Nests?

Hornets, as well as all other wasps and bees, have a life cycle that is completed in four stages. They start in eggs and then become larva which is essentially a legless grub that is raised within the cells of the hornet’s nest. Next, they turn into a pupa before finally transforming into a full-grown hornet adult.

Now that you understand the lifecycle of these stinging insects, you can have a better grasp of the function their nests serve. Hornets create nests that only last for one year. These nests are built from scratch and never re-used as the queens are the only members of the colony that survive throughout winter. In the spring, a queen will pick a location to build a small nest and create daughters that become workers to grow and maintain the nest as well as care for offspring while the queen produces more eggs.

Can You Remove A Hornet’s Nest On Your Own?

When property owners notice a hornet’s nest on their property, they often want to try to remove it on their own. It can be tempting to think it will be easier and cheaper to handle the issue by yourself, but this is very rarely the case. For one thing, trying to remove a nest is when you're most likely to be stung. Hornets and other stinging insects will defend their nests from harm, and some species will attack in groups and can even sting and inject venom multiple times. Because of this, you could end up with a medical emergency if you are attacked.

What Is The Safest Way To Remove A Nest?

Instead of putting your health and safety at risk, get in touch with the experts at Beeline Pest Control at the first sign of a hornet infestation. Our trained technicians have the skills and tools necessary to completely remove hornet nests, and we also provide ongoing residential pest control options to keep stinging insects away for good.